As you all know that Petrol price hikes have been a nightmare for all of us that happened just a few days back. Here are some tips and tricks that will surely help you to reduce your Petrol bills.

1. Switching off Vehicles at Traffic Signals
Switching off your car engines at long traffic signals is a the best way to save fuel, especially when stoppages are more than 60 sec. Calculations show that each vehicle owner can save over Rs 3,100 annually just by ensuring that his or her car is switched off at every red light that lasts for more than 14 seconds which would hold for, perhaps, all signals.

2. Check the Tire Pressure
Check tire pressure every month. Free tire checking facility is available at almost every petrol pump in India. Under-inflated tires are one of the most commonly ignored causes of crummy mileage. Tires lose air due to time (about 1 psi per month) and temperature (1 psi for every 10 degree drop); under-inflated tires have more rolling resistance, which means you need to burn more fuel to keep your car moving. Under-inflated tyres can add up to 3% to your fuel bill; they’ll wear down more quickly and could actually be dangerous, too.

3. Shutting off the A/C
Consider shutting off the Air Conditioner. Open the windows and enjoy the breeze and atmosphere. I know its very hot now a days but we can atleast enjoy the weather in the evenings. That said, at higher speeds the A/C may be more efficient than the wind resistance from open windows. It is said that at lower speeds vehicles with Air conditioners on consume 10% more fuel than normal.

4. Ditch the Extra Weight
A 100kg load can reduce mileage by up to 5 miles per gallon. So remove roof racks when not using them, empty the book of unnecessary items and enjoy driving a more streamlined and efficient car!

5. Perform Some Basic Maintenance
When was the last time you checked your own tyre pressures, oil level and coolant? A well maintained car is more fuel efficient – keep on top of these little jobs and not only will your vehicle be more reliable, it’ll use less fuel too.

6. Convert to CNG
The if-all-else-fails the solution to rise in cost of petrol is to switch over to CNG. A lot of people have qualms over switching to CNG because of the initial costs. Yes, they’re quite a bit but if you’re planning to keep your car for quite a period of time (it’s not a phone, right?), it’s a cheap investment. With Govt approved CNG kit vendors everywhere, getting your car to switch over to CNG is pretty easy. The cost of refueling CNG is significantly lesser than petrol and you’ll end up saving a lot more over a period of time. The taxi wallahs already switched a long time back, the question is, when are you?

7. Stay in the Left Hand Lane
Driving at 56mph will reduce fuel consumption around 25% compared to driving at 70 mph.

8. Change Gears Earlier
It is recommended that you change gears at 2000rpm(Diesel) or 2500rpm(Petrol)

9. Take the Quickest Route
Taking the quickest route will help cut down costs, use a sat-nav or Google maps to plan your journey. Avoid built up areas and speed bumps where possible. 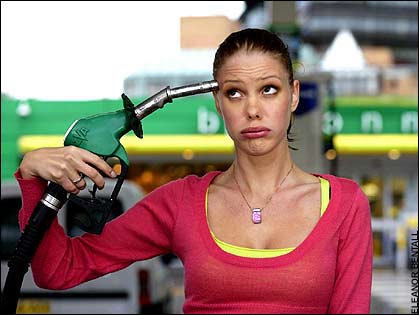 Mumbai, Sep 19 (IANS) The Tata Group Monday unveiled a Nano car – made with gold and silver, and studded with precious stones – worth an astronomical over Rs.22 crore.

Watch and jewellery maker Titan, which owns the Goldplus chain of jewellery, has decided to gold plate one Nano, the wonder car from Tata, as part of its campaign to celebrate 5,000 years of Indian jewellery.

But, it’s not for sale – the valuable and fully functional car is a unique branding and promotional initiative by Goldplus Jewellery, part of Titan Industries, a Tata Group company, an official said.

The Goldplus Nano Car pales the average Rs.1.40 lakh Nano, which started with a Rs.1 lakh price tag at its launch.

The Goldplus Nano Car is billed as the world’s first ever gold jewellery car and celebrates the 5,000 years of jewellery making industry in India.

The car’s body is made with 80 kg 22 carat solid gold, 15 kg silver, precious stones – including diamonds, rubies – and other expensive gemstones, the official said.

“As many as 14 techniques of jewellery making have gone behind the effort — from the intricate filigree work to the delicate and colourful meenakari work, the stunning kundan to the traditional naqashi…marking the convergence of diverse and culturally distinct jewellery making techniques from around India,” the official told IANS.
Titan threw a challenge to its designers to gold clad Nano, with traditional jewellery designs as the core concept. Unveiling the three shortlisted designs, Titan said it would ask the public to vote for the best design.
Titan Industries managing director Bhaskar Bhat said that since eternity, jewellery made with gold and precious stones has been an integral part of the Indian woman’s life.
“We will gold clad one Nano car with the most popular design and show it around the country. Some may even get a chance to ride the modern gold chariot,” Venkataraman said.
He said the company will be adding five more Goldplus outlets this year to take the total number to 34 outlets across six states. The average investment per Goldplus store is around Rs.7 crore ($1.5 million) and each store is earning around Rs.20 crore per annum.

After its glittering launch in Mumbai Monday evening, the Goldplus Nano Car will travel to all the Goldplus showrooms at 29 locations around the country.

The car incorporates beautiful designs, made with the precious stones of different colours, set on the gold and silver body of the car.
Titan’s two jewellery divisions (Tanishq and Goldplus) this year are expected to close with a turnover in excess of Rs.4,500 crore ($1 billion) as against Rs.3,500 crore ($789 million) earned last fiscal.
“Goldplus revenue will be more than Rs.500 crore and that of Tanishq will be more than Rs.4,000 crore,” Venkataraman said.